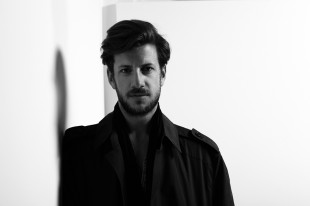 A rising star in German fashion, the young designer has won several important prizes, such as “Textil Innovationspreis” (2009) and “Start your Fashion Business” (2010). He was also a finalist of international competitions, including “Designer for Tomorrow” (2009), “Mango Fashion Awards” (2010) and the International Woolmark Prize (2012). Followed and praised by international press (Suzy Menkes has raved about his 2009 Berlin Fashion Week collection referring to it as “the best”), he was the youngest designer ever to be invited to participate in the prestigious art show “DYSFASHIONAL” (Paris 2009; Berlin 2010).Instead of being drawn, his designs come to life on mannequins through inventive drapery work. As the designer regards his creation process as fluent, the transitions from season to season build upon each other. With this approach the designer wants to blur the common fashion borders and create a generality detached from fashion parameters such as seasons, trends and the consumers’ ages. This approach is evident in the clarity of his designs.

This entry was written by Florian, posted on November 1, 2010 at 10:06 am, filed under Mueller & Zenone and tagged about. Bookmark the permalink. Follow any comments here with the RSS feed for this post. Post a comment or leave a trackback: Trackback URL.